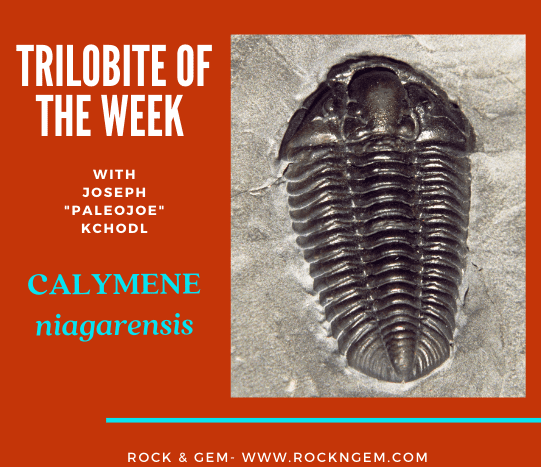 CALYMENE niagarensis is a very common Silurian trilobite found in the Rochester Shale.

The trilobite is roughly triangular with a cephalon that is roughly semi-circular in shape. This trilobite is fairly broad, has a small pygidium, and presents with a thick exoskeleton. The thorax has 12—13 body segments.

Many species of the CALYMENE appear around the United States, each differing a bit in body structure, size and shape. The niagarensis species is usually just over one inch in length. Examples of this trilobite are common in the area around Middleport, New York, and on occasion, in the Niagara gorge.

Trilobites, an extinct form of arthropod related to insects, crabs, crayfish, and horseshoe crabs, are among the most prevalent invertebrates with hard body parts to appear during the Cambrian Period. These creatures are called trilobite due to the three distinct “lobes” running vertically through the body section.