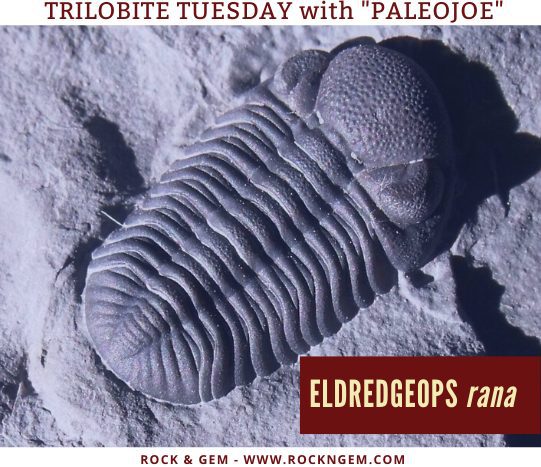 As you may be well aware, trilobites are an extinct form of arthropod related to insects, crabs, crayfish and horseshoe crabs. These creatures are called trilobite due to the three distinct “lobes” running vertically through the body section. In this week, the featured trilobite is Eldredgeops rana.

The Eldredgeops rana has a large inflated and semi-circular cephalon with large crescent-shaped eyes. The cephalon is highly ornamented with tubercles. Generally found in black or dark grey shale the exoskeleton usually is a deep black color. These trilobites can also be found in an “enrolled” or rolled up condition indicating they were protecting themselves from some sort of danger, often thought to be storm events since the areas during the Devonian were near the equator.

Generally, they are found approximately one inch long but in certain areas can be over two, such as in Sylvania, Ohio. This is a very common and readily identified trilobite.

Plus, learn more about PaleoJoe and his daughter PaleoJen and their paleontology exploration partnership in an the article “Fueling a Passion for Paleontology”.