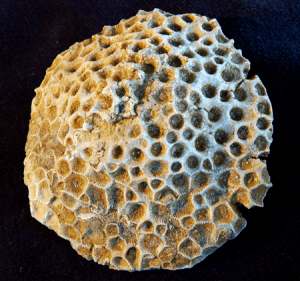 Michigan has a wonderful and ancient prehistoric past. But due to certain geological and meteorological factors, some periods of Michigan’s past are missing. It is a past interrupted.

Michigan is very fossil rich, especially in the northern Lower Peninsula. Some 350 million years ago, this area was a warm, shallow, salt water tropical sea. It was the period called the Devonian Period, named for Devon, England, where fossils of this age were first discovered and described. During the Devonian, the seas were teaming with life. Primitive land plants began to develop and populate the land masses. Marine animals thrived and died and became the fossils we know today.

There is abundant evidence that this area was a warm tropical sea. First of all, parts of Michigan are known for their salt deposits, which could have only formed in the ancient tropical oceans. Herbert H. Dow established his chemical company in Midland, for example, because of brine deposits. Additional evidence manifests itself in the Michigan state stone — the Petoskey. In its natural state, the Petoskey stone is a Hexigonaria coral, a marine colonial creature. Each individual creature is made up of a hexagonal shaped structure. Each neighboring coral forms the walls of the structure of its neighbor, forming a colony of hexagonally shaped creatures. There are actually about seven different species of Hexigonaria in the Devonian rocks of Michigan, Ohio, New York and Canada.

Corals are simple aquatic animals that are credited with the formation of reefs and in some cases islands in the ocean. Corals are important rock builders because they are comprised of calcium carbonate exoskeletons that are essential in the formation of limestone. Two common types of coral found here are solitary and colony corals. Their names suggest the way they lived. Solitary corals such as horn coral grow by themselves and colony corals grow in tight groups.

Another interesting and important fact about the northern Lower Peninsula is the expansive limestone formations found there. This Michigan limestone, which is a sedimentary rock, was formed by billions of sea creatures’ exoskeletons made of calcium carbonate. These salt water creatures died over the millennia and fell to the bottom of the sea. Over time the compression of the shells, corals and other remains formed the limestone now so important to Michigan’s cement manufacturing operations.

During the Devonian Period, many coral reefs were formed and provided sanctuary for a wide variety of sea life, much as modern coral reefs provide habitats for today’s sea creatures. One may easily find many of the more than 200 species of prehistoric life that inhabited this small area. Other than corals, creatures such as crinoids, gastropods, brachiopods, cephalopods, trilobites and very primitive fish and sharks swam and lived here. All of these fossils may be found here, although the most common are corals, crinoids and brachiopods.

The Crinoids, commonly and incorrectly called sea lilies, are actually Echinoderms, animals related to the modern day starfish. The central column is made up of small disc-shaped segments that are stacked like poker chips. Once the creature dies the structure falls apart, leaving hundreds of such discs scattered on the ocean floor. The top crown, or calyx, is surrounded by many feather-like appendages that filter the seawater in order to feed. Common throughout history, Crinoids are still found in the deep oceans today and are nearly unchanged from their Paleozoic predecessors.

Brachiopods are simply sea shells. These ancient creatures abounded in the seas of the Paleozoic Era. Sometimes called lamp shells, these once common invertebrates are some of the most easily recognized fossils. Of the nearly 30,000 species of brachiopods that were once common in the ancient seas, only about 200 species survive today. These primitive seashells came in many forms, but commonly have two unequal parts that were held together by an internal muscle structure. Some brachiopods grew to nine inches long, but most were only about an inch in diameter.

Over the last 350 million years sediment accumulated layer upon layer covering the Michigan we know today. But thanks to the last Ice Age (actually four major Ice Ages and several smaller ones), much of the dirt and material covering certain parts of Michigan were scraped away, exposing the bedrock. Other areas of Michigan have deposits of overlying sediment that were deposited by the glaciers rather than scraped away. Sleeping Bear sand dunes and the huge sand deposits near Benton Harbor are examples of such deposition. Areas near Muskegon and other places around the state are strewn with boulders. But Alpena and Rogers City, along with the eastern shoreline of Michigan, abound with ancient marine fossils.

Rock exposures around Alpena and Rogers City are replete with fossils. Nearly anywhere you see rock, exposed fossils may be found. Rockport State Park, an abandoned limestone quarry north of Alpena, also has fossil exposures that may easily be accessed. Walking along the lakeshore south of Charlevoix, bedrock formations stretch from shore out into Lake Huron and fossils may be found there as well.

Petoskey is also fossil rich. However if you want to find the world famous Petoskey stone you’ll need to get there early in the year. Mother Nature helps during the winter by tossing corals up on shore or into shallow water along with blocks of ice. Many local rock shop owners put on dry suits and wade into the bay even as ice still flows past.

The best way to find fossils is to join one of the many local rock clubs in Michigan. They often lead field trips or know locations where you can go to find fossils.

Michigan is a wonderful state. Go explore what it as to offer. From Pictured Rocks to the copper and iron range to Sleeping Bear Sand Dunes to Saginaw Bay. From Detroit to Benton Harbor and from the Ambassador Bridge to the Mackinac Bridge, there is much to do and much to see. Go explore. You will be surprised at what you discover. 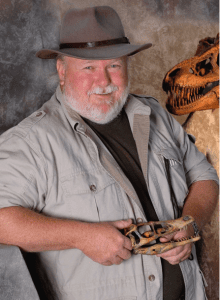 Joseph J. “PaleoJoe” Kchodl is an avocational paleontologist originally from Lewiston, N.Y. Since moving to Midland in 1993 he has continued his lifelong passion for the collection and preservation of fossils as well as educating the public about our prehistoric past. He has developed a nationally traveling museum exhibit on the ancient sea creatures called trilobites. Since creating that exhibit he has consulted and acted as Chief Science Officer for a new Ice Age exhibit due to begin touring in 2011. He continues to lecture, provide school and library programs across the United States. In 2001 he was awarded the Katherine Palmer Award from the Paleontological Research Institute in New York. In 2008 he discovered a nearly complete skeleton of a Camarasaurus in the deserts of Utah. He has a continuing radio series on WGVU radio and has appeared on TV across the state of Michigan on the WCMU TV series Destination Michigan. His archived radio podcasts may be accessed through his website, www.paleojoe.com.

Would you like to see more information like this? Learn how you can help the Mackinac Center provide incisive, accurate and timely analysis of critical policy issues.