Lots of Ribs but no Bar-B-Q sauce

Have you ever wanted to dig fossil bones? Fancy yourself as a modern Indiana Jones? You too can join the growing trend of people digging through the ancient fossil record in search of prehistoric creatures.

Ahhhh. Springtime in Nebraska. The prairie grasses are a brilliant green, there is the sweet smell of the brilliantly colored flowers that have exploded in full bloom wafting through the still morning air. A bright azure blue cloudless sky forebodes a spectacular day bathed in the boundless Nebraska sunlight. Butterflies flitter from bush to bush, flower to flower. Some briefly light on your cloths almost as if the stop to rest before their next furious flight in their search for springtime nectar.

The Northeastern part of Nebraska has large tracts of land, open land and wide open spaces. Trees surrounded most of the fields huge herds of cattle graze. Softly rolling hills are bisected by ravines with small streams and rivers running through them. It’s a prairie lovers dream. Towns are small and widely spaced giving you the feeling that you are alone.

Why Nebraska? Why travel here? What is so important about Nebraska? Aside from the staggering natural beauty, it is a fossil rich part of the United States. Parts of the state are so rich that lying just beneath the surface are tons of bones – fossil bones – bones of animals that lived here millions of years ago. The story of one such place – Ashfall Fossil Beds – is a story of life and death. 11 Million years ago until about 3 Million years ago, the plains of Nebraska were similar to those of Africa today. Animals similar to Zebras, Rhinos, Giant Camels, Mammoths and Mastodons, Giant Horses, and many other animals inhabited the area. Saber-Tooth Tiger remains and two skeletons of a Saber-toothed deer have also been found in the area. 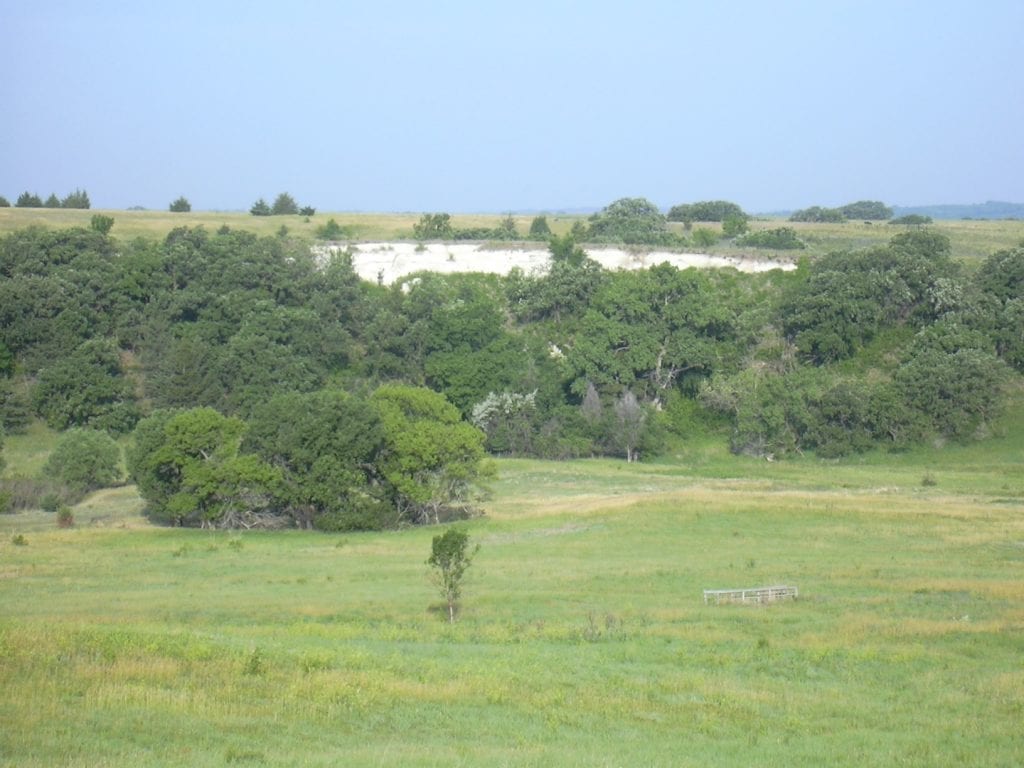 A view of the Ash layer near Royal Nebraska

There was also a waterhole. This water hole attracted herds of rhinos, camels, horses, deer, and other animals that lived in the area. Thousands of miles to the west a giant volcano was ever threatening. It erupted one day in an explosion rarely seen on earth. The eruption, many times greater than that of Mt. St. Helen, sent a giant plume of searing volcanic ash high into the sky, drifting hundreds of miles. It coated the landscape burying and killing the vegetation for hundreds of miles. Needless to say without the vegetation the animals soon began to perish – but not before they gathered around a dwindling water hole. The ash was a thick choking cloud that descended to the ground filling the waterhole with layers of ash as well. The animals died, where they stood, without food or water with ash clogging their lungs. It was a painful end to the animals in that area. The story is now being told in the layers of that ash and sand as it is removed. Scientists, paleontologists, modern dinosaur C.S.I’s are now studying the remains as they are brought into the light of day – again after millions of years. You too can become a C.S.I. helping discover the truth that lay buried for millions of years.

Earlier this year, I joined a group of die-hard locals, amateur paleontologists, and actual paleontologists belonging to the Friends of Ashfall Fossils Beds just outside of Royal, Nebraska as they began their quest for clues of ancient death and dismemberment that happened nearly 11 million years ago.

Approaching Royal, a very small whistle stop along route , I passed the motel I’d be staying in. Looking for a place to eat breakfast and stopping in a little diner at the other end of town that would be an oasis for the duration of the trip, a pretty waitress stood behind the counter. Looking around the diner, a few locals were talking, laughing, joking and drinking coffee that was as black as night sky.

Asking the waitress what time she opened for breakfast she replied, “We open at six.” There came a loud voice in reply from one of the tables, “Yea but she’s grumpy till 7” The room erupted in laughter – what a great way to start an adventure.

That afternoon checking into the motel, I asked if they had HBO or Showtime. The older gentleman – the obvious owner of the establishment said “Well, we used to have cable out here, but they got rid of it – not enough people so I’ve got satellite instead.” Great, I thought, a huge variety of shows. “But,” he continued, “All the rooms are hooked through my TV so if you want to watch something – just let me know and I’ll change the channel. Only not during the news and Letterman.”

OK, now we’re out in the boonies. Cell phone reception was at best, spotty. I asked if there were phones in the room the reply came ‘No but if you have a cell and go three miles up the road, you’ll get a better signal.”

Well not believing him I tried to make a call to my wife – standing outside near a rusty old swing set that obviously had seen better times – I began a conversation. The connection was intermittent but I got through. As I moved around the yard reception got better and worse. Jokingly I told my wife I’ll grab onto the swing set and see what happens – oddly enough the reception got better. 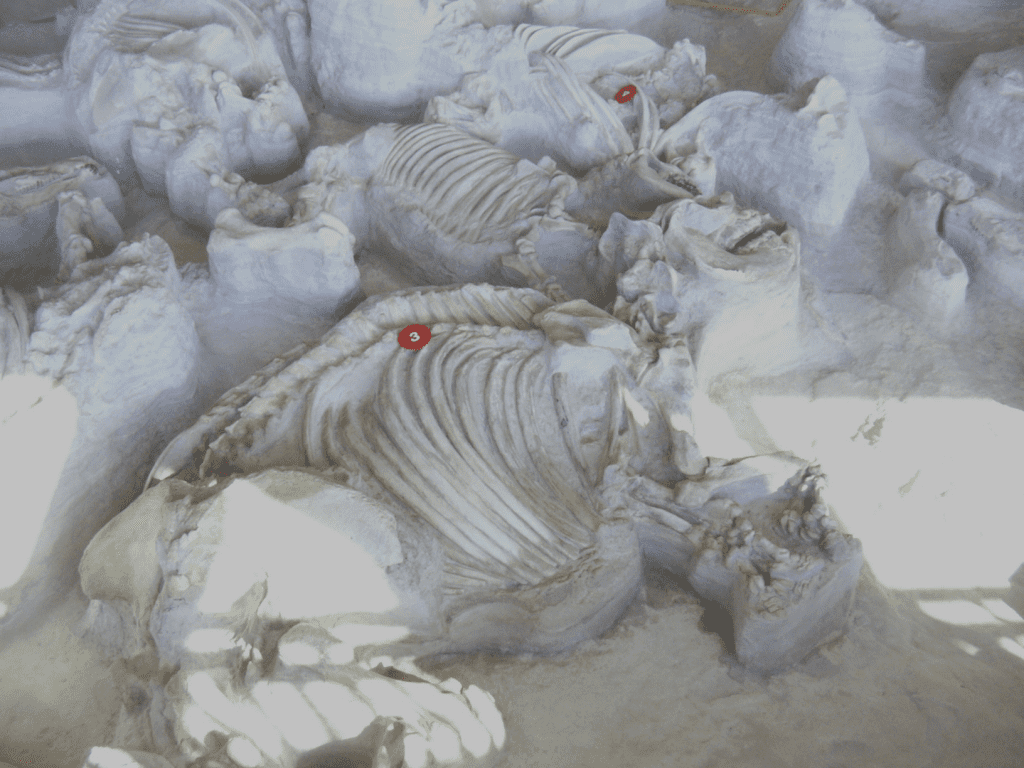 A view of animals in the Ashfall Rhino Barn

At the Ashfall site they have constructed a structure over a very unique site. It is a place where hundreds of skeletons have been found in a great state of preservation. They are mostly comprised of Barrel-Bodied Rhinos. They had died at the site of an ancient water hole. A waterhole because beneath the skeletons were found fish, snails and aquatic plants pointing to the fact that there was a water hole here. It is a spectacular site. These animals were buried by ash and were left undisturbed by scavengers. This is a great site that tells a story of death 11 million years ago.

The next day I met with the rest of the diggers at the Ashfall Fossil Beds Sate Park. Dressed in big floppy hats, hiking shoes and a wide array of other clothing, we discussed the day’s activities. Dr. Michael Voorhies, of the University of Nebraska in Lincoln, the subject matter expert had grown up in Royal and spent most of his life in the area. He began by telling us stories of the ancient life of Nebraska. Equipment was provided to all participants and off we went.

The site we were traveling to was about 5 miles away as the crow flies. But not as man makes roads. About 20 minutes into the trip, we took down a piece of barbed wire, crossed into a field with the vehicles and began to go cross country.

We dodged meadow muffins – big piles of cow dung for the city folk, gullies and prickly pear cactus and arrived at our location. It was first discovered after a prospecting trip in 2005 by a dig team that was unable to dig due to inclement weather and wet ground. It was decided to prospect – look for bones weathering on the surface. As they criss-crossed the Nebraska plains one member discovered a rhino jaw weathering out of a gully. The site was marked and noted for further excavation in 2006. 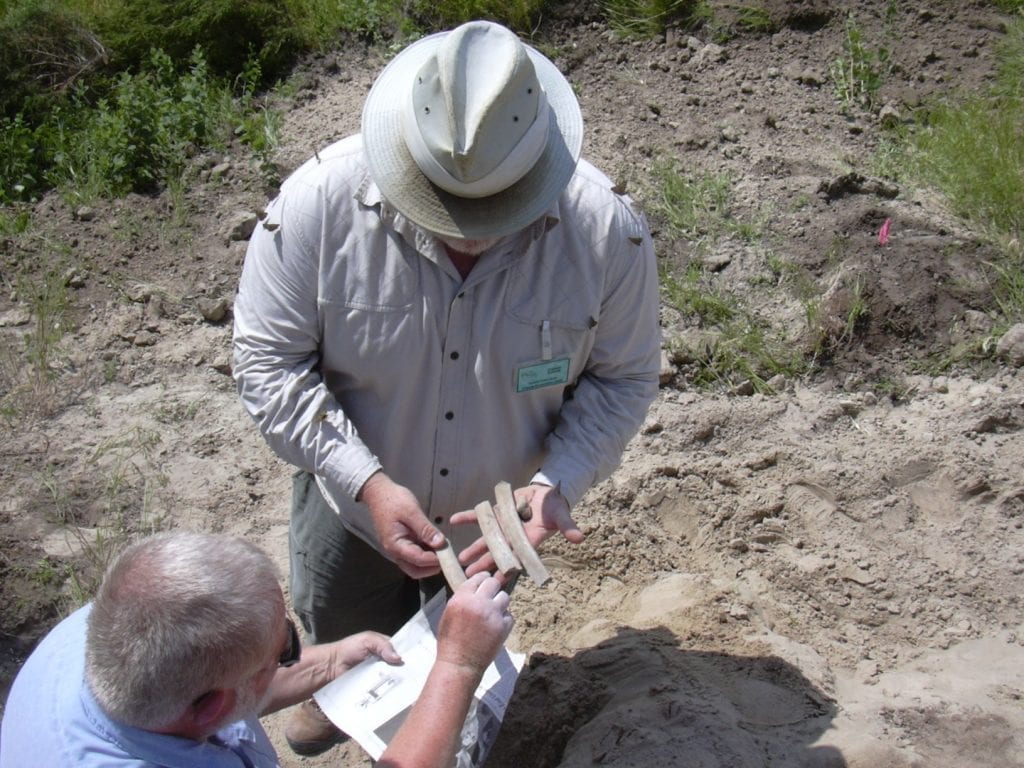 Michael Voorhies inspect and catalog a rib discovered by PaleoJoe

Returning this year we began the excavation. One of the graduate assistants, Shane Tucker of the University of Nebraska began excavating one side of the gully. The hard work began. Overburden, the dirt and sediments covering the actual fossils, had to be removed. Once removed a soft cream colored layer of sandy soil was exposed. This looked promising. Sand – sand from ancient riverbanks and streams often foretells the discovery of fossil bones.

By scraping the soft sand into the trowels and buckets the layers of time are scraped away.
Then a metallic “Tink” a telltale sound that lets the fossil digger know something interesting might be found. Unfortunately the “tink” can also be associated with a small rock or pebble being scraped by the metal trowel.
But not this time, a bone – a flat bone, a long flat bone comes into view. Gently removing the sand around the long bone we see that it is a rib bone. This bone has just been uncovered and I was the first human being to see it. This was the first time in 11 million years that this bone has seen the light of day. 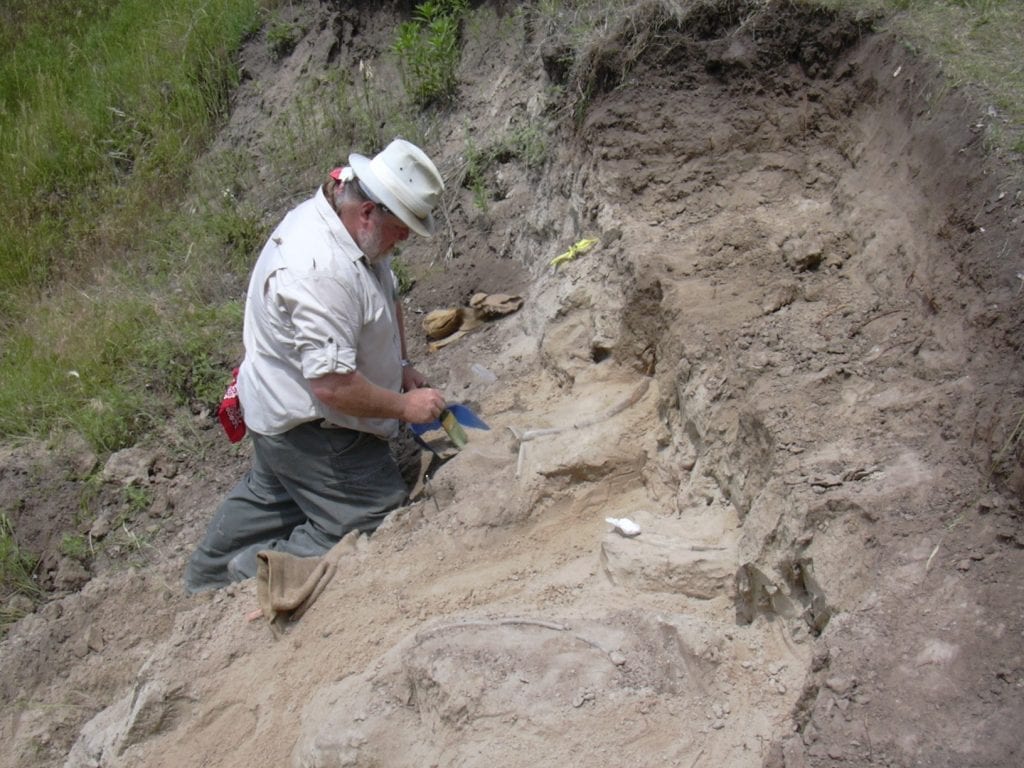 PaleoJoe’s dig site, the side of a ravine.

Then another tell-tale “tink.” Then another and another. Lying there partially covered literally by the sands of time, was a partial rib cage.

Evidence shows that these animals we were digging lived and died on the banks of an ancient river that once moved through this area. The river would occasionally overflow in times of heavy flood. Sometimes animals swept up in the periodic floods would die and bones would be covered by sediments beginning the fossilization process. The rivers would overflow the banks fairly regularly creating numerous bone beds. It is in just such a bone bed that we were digging. Other members of the team also discovered Rhino bones and teeth, as well as numerous other animal bones. 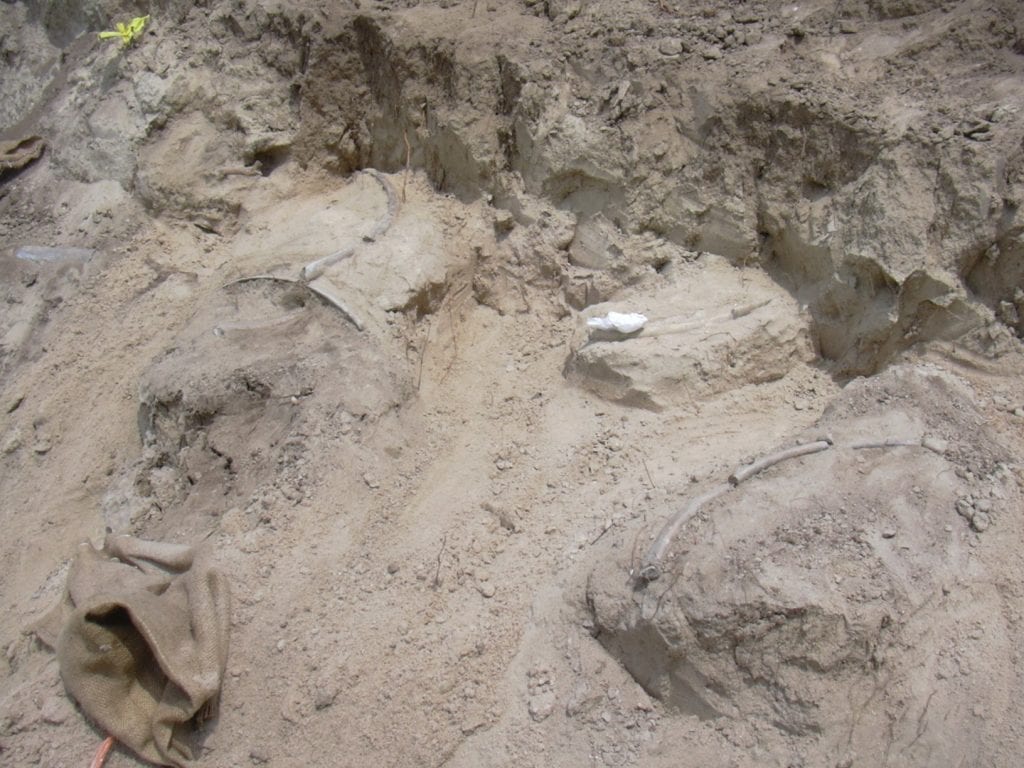 You too can spend a week or a few days digging ancient remains of fossilized creatures. There are several sites that are accessible to people wishing to live the fossil hunting and discovery experience. These can be gleaned from the internet just by searching fossil digs. Many groups, companies and organizations lead digs into the field. Costs are involved. Hotel rooms, dig fees, costs for meals, a per diem charge is also levied. Unfortunately you cannot keep the bones in most cases. These bones become part of the scientific record. Your name will become part of that record as the discoverer of those bones. Small price to pay for a fossil digging adventure.