6th Grade Michigan Curriculum-Based program on Fossils
To assist and reinforce the curriculum taught by the classroom teacher.

7 – 9 & High School Dinosaur CSI
A Scientific Multi-Media Program
Describing what we know about Dinosaurs by researching the evidence found the ground.

Elementary School MARCH IS READING MONTH Assemblies –
Excite the students about reading with this wonderful Dinosaur program from a REAL Michigan Author and Dinosaur Hunter.

Assemblies Available at this Time
Fascinating Fossils – A look into the world of fossil collecting and study. Describing how fossils are formed through to modern collecting techniques. Students will learn about geological forces that shaped our world and how they affected the development of life on Earth. Conforms and reinforces National Education Standards for GeoScience. Specimens ranging from 350 Million Years ago to 15,000 years ago will be showcased.

Fossils of the Michigan Basin
During a geological period called the Devonian  – 350 Million years ago, much of was what is now Michigan was covered by a warm shallow tropical sea. There were numerous reefs and beaches. Creatures lived and died here during the passage of time. Millions of years of sediment were deposited subsequently covering these rich fossil beds and ancient coral reefs. Thanks to the numerous Ice Ages that followed, sediment was scraped away, exposing these coral reefs once again.  The Michigan Basin is rich in paleontological history. Let your students see and hear about the rich paleontological history Michigan has to offer.Hear stories about the varied creatures that once inhabited these ancient tropical seas that covered much of the Midwest.

Digging Dinosaurs
Join PaleoJoe as he describes how dinosaur fossils are created and the stories they tell. Learn how these creatures lived and died on one of the most fossil-rich parts of the United States, Como Bluff, Wyoming. Continue the journey on to Montana and enjoy the tales of adventure as he digs dinosaurs.

Trilobites
Arthropods of the Ancient Seas – The who, what, where, when, and why of these popular creatures of the Paleozoic. Storytelling and drama are used to explain how these creatures lived and died millions of years before dinosaurs ruled the Earth. Learn why the Cambrian Period was referred to as the Age of the trilobites.

PaleoJoe & the Trilobite Adventure
Follow PaleoJoe as he relives dig site adventures and uses storytelling to take the students on a Trilobite Dig. Look at how they lived and why they died. Experience how we learn by the stories fossils can tell us.

Dinosaurs of Hell Creek
PaleoJoe returns from Hell Creek to tell a tale of Dinosaur Hunting in the famous Hell Creek Formation of Montana. Describing the process of “Bone Hunting” PaleoJoe employs a power point (where appropriate) presentation coupled with hands-on experiences as well as other visuals to give the audience an idea of what Dinosaur Digging is all about. Join PaleoJoe as he takes you on a trip back in time and brings you right into the present, searching for and finding these magnificent creatures of long ago.

New Program* Dinosaur CSI
PaleoJoe Takes you on a trip back in time to learn about the victims and perpetrators, life and death of the prehistoric. Learn the techniques used in the investigation of how these creatures lived and died. See the evidence and discover the stories that are told through Dinosaur CSI. This program is not appropriate for Kindergarten through 2nd grade.

New Program* Dinosaur Day with PaleoJoe
Join PaleoJoe as he briefly describes different stages of the earth’s development, how the earth was formed, the way fossils are formed – all while following National Curriculum Standards and Benchmarks – reinforcing what teachers teach in school. A brief description of types of fossils leads to the Ice Age of North America and is followed by everyone’s favorite – DINOSAURS. A spirited discussion of the herbivores and carnivores that once dominated the earth. Learn how we know what we know by looking at the dinosaurs themselves for clues. T-REX and Velociraptor play a major role in this part of the presentation. 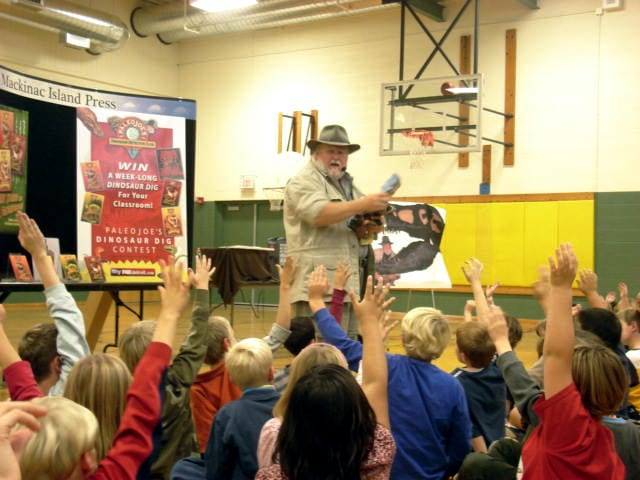 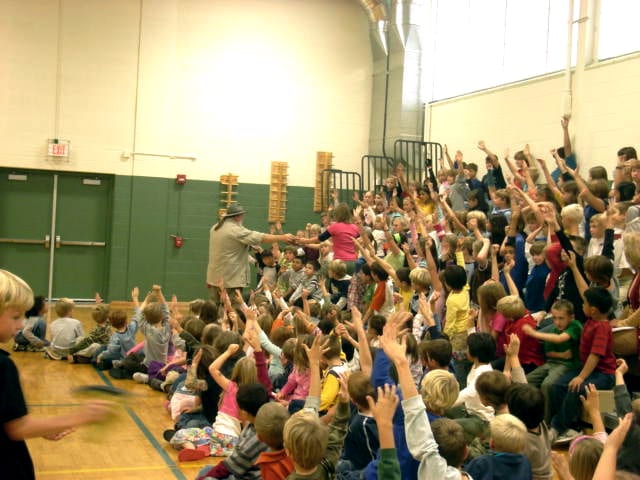 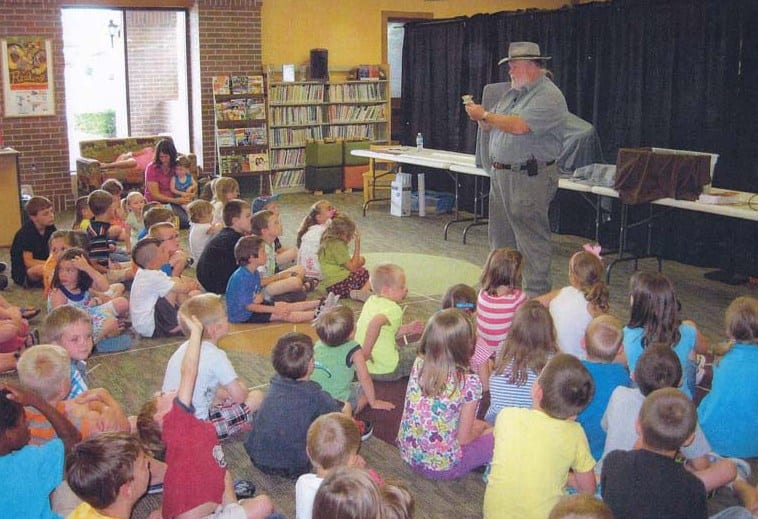